Every year mid October we eagerly pack the Land Rover and set off for the Wine on the River festival in Robertson.  Held on the banks of the Breederiver you can taste a variety of wines from  the  Robertson, Ashton, Bonnievale and McGregor areas. We’ve always loved this festival – this year it was a bit of a hit and miss.

The Friday is alway our favourite day at Wine on River.  You can take your time to decide what to taste and get a chance to chat to the people who man the stalls. Saturdays are usually too busy for that.  I did notice that there were fewer wine stalls this year than the previous years. Noticeably absent was Van Loveren Family Wines.  However there were enough wine stalls to keep us busy and we had a great time.

Here my friend Jackie and I are getting into the spirit of things. 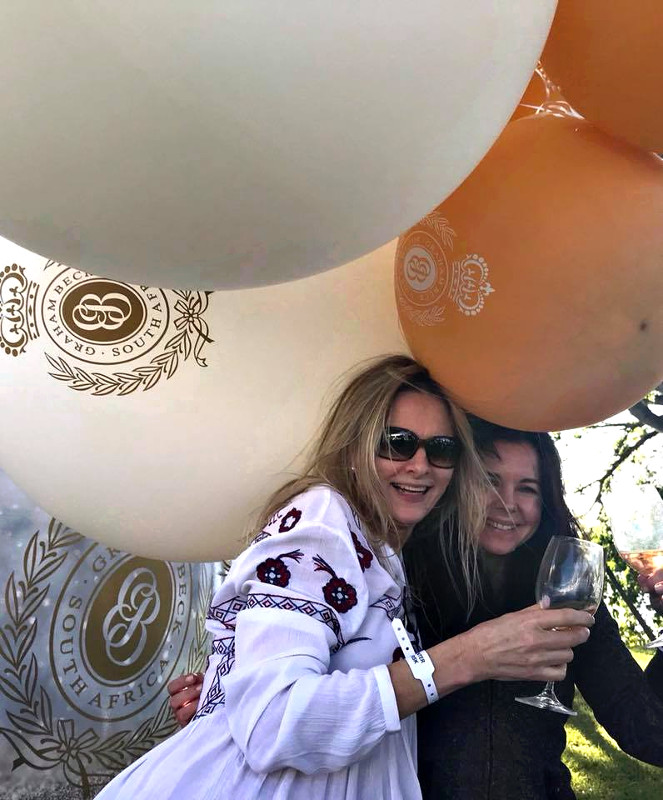 We camped at  Bonnievale River Lodge as it is close to The Arena in Bonnievale – one of the two Wine on the River shuttle pick up points in Bonnievale.  We got there bright and early to wait for the first shuttle (as advertised on their web site) to arrive.  And waited and waited – in the hot sun.

Shuttles went past, but were full from the other pickup point. Did no one tell them there were two pickup points?  Finally our friend went to stand at the side of the road and  flagged down a minibus taxi.  The other very irate festival goers who have been waiting with us all agreed that R30 per person was a very small price to pay to get to the festival. 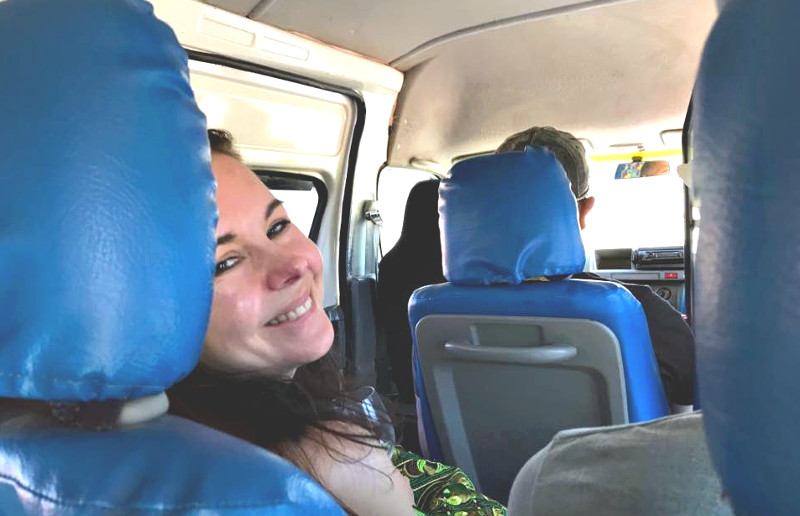 Here I’m sitting in the taxi, face pink from sun and agitaton.

We arrived at Goudmyn farm at around 10h15, thinking that surely we’re still in time to grab a shady spot somewhere as the gates were only supposed to open at 10h00. The place was already packed as apparently they opened the gates earlier.

So we picked a spot that got a bit of shade from the edge of the marquee tent, scrounged an umbrella and dragged a couple of tree stumps to our spot to sit on.  Not sure why there were no hay bales this year – maybe because of the drought?  In spite of the rocky start to the day we were optimistic again. 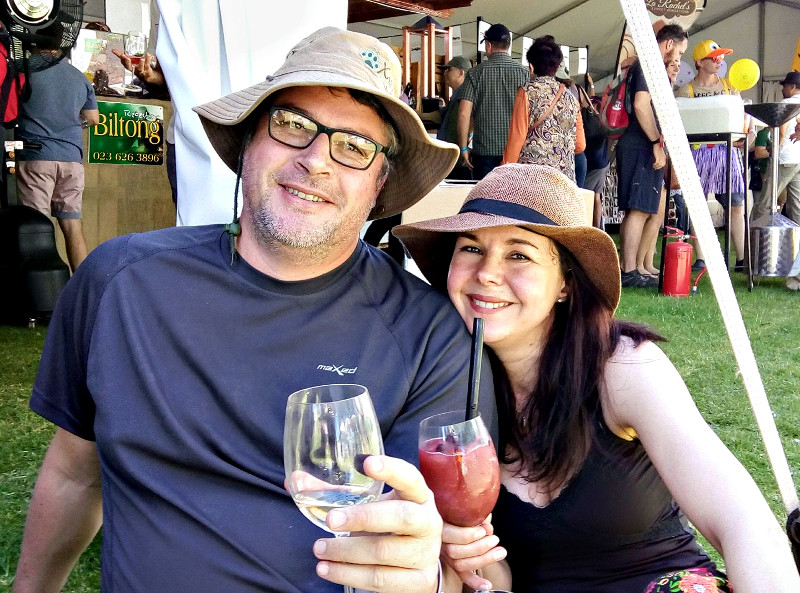 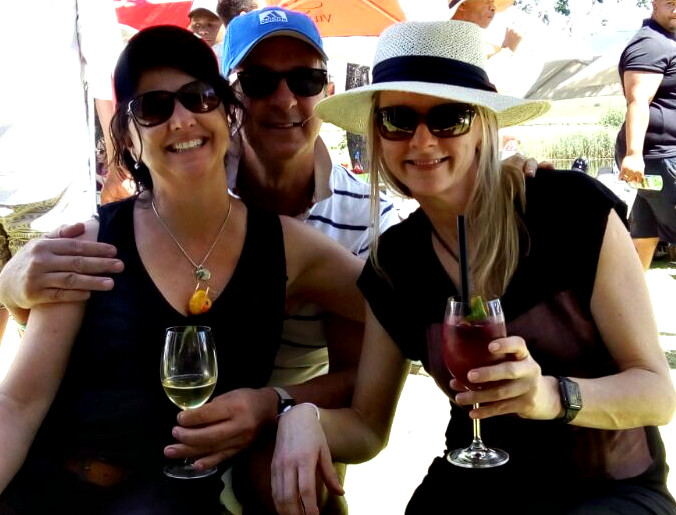 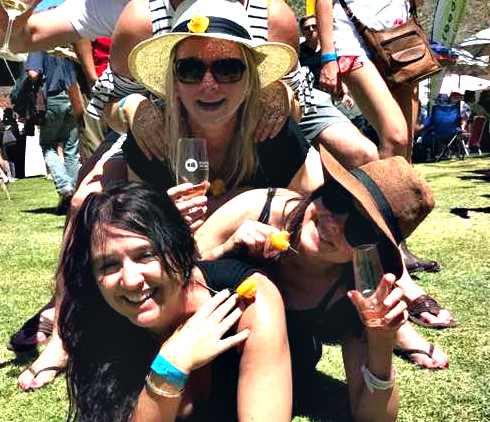 This year the festival seemed more crowded than previous years. Maybe there were more people or maybe it just felt like it as there were less wineries and the whole festival area felt smaller.  Or maybe it was that we were sitting on the edge of the marquee tent with people all around us.  I can’t remember that we had to wait so long for food last year. Or that some food stalls started running out of food. At least with the urinals for the men the lines to the toilets were shorter this year !

Fortunately we’ve already tasted all the wines we were interested in on the Friday.  This meant that we only had to brave the crowds at the wine stalls when we wanted to top up the bottles in our ice bucket.

At around 15h30 we had enough and decided to go home. We never considered that it would be an issue getting a shuttle back to Bonnievale.  We were optimistic.

There were shuttles going to Robertson but none to Bonnievale.  Standing in the hot sun (again) we were getting a bit desperate (again).  Then the wonderful guys from the River Goose camp site in Bonnievale took pity on us and gave us a lift back to shuttle drop off point on the back of their bakkie.

I have to mention that there were road works between the shuttle  points and the festival area. This would have affected the shuttle travel times.  However surely the organisers would have been aware of this at the time of drawing up the shuttle schedule.

I don’t know whether we’ll ever go to Wine on the River again – the whole shuttle fiasco kind of ruined it a bit for us. I do know that we’ll never go on the Saturday again.  But in spite of the day’s transportation woes, we  popped another bottle of bubbly and had a great evening at our camp site. 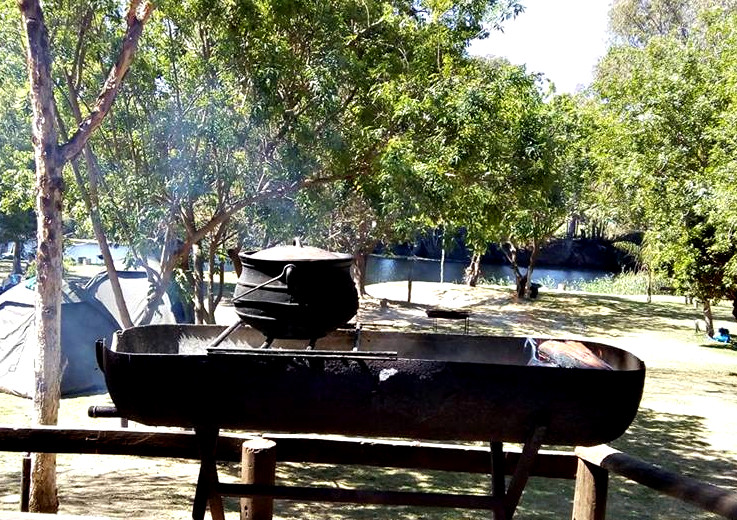 Our wine road trip in the Breede River Valley – where we went and what we bought.