Vila Nova de Gaia (or simply Gaia) is a city across the river from Porto.  All the cellars (locally known as “caves”) where the port is stored and aged are there.  This was our base for our last week in Portugal.

After spending a couple of days in the beautiful Viana do Castelo (you can read about it here)  we took a bus to Porto.  A taxi driver shouted at us while we were waiting for our Uber ride (presumably for getting Uber instead of a taxi).  Lesson learned – never get an Uber where the taxis are standing.

We stayed at Reis de Gaia – a lovely little hotel with friendly staff.  We had a great view of Porto from our balcony.

Starving we went in search of lunch which we found at Skiff Bar on the waterfront.

The Bechamel  cod with potatoes was excellent.  Adrienne had pork steak with a port sauce which he said was OK.

And of course lots of wine. We explored a bit of Gaia after lunch. 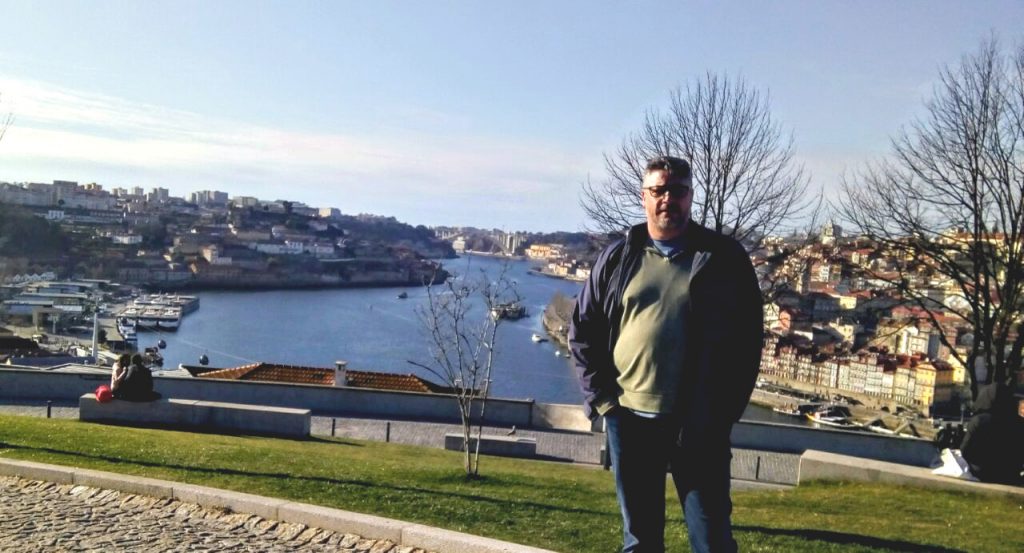 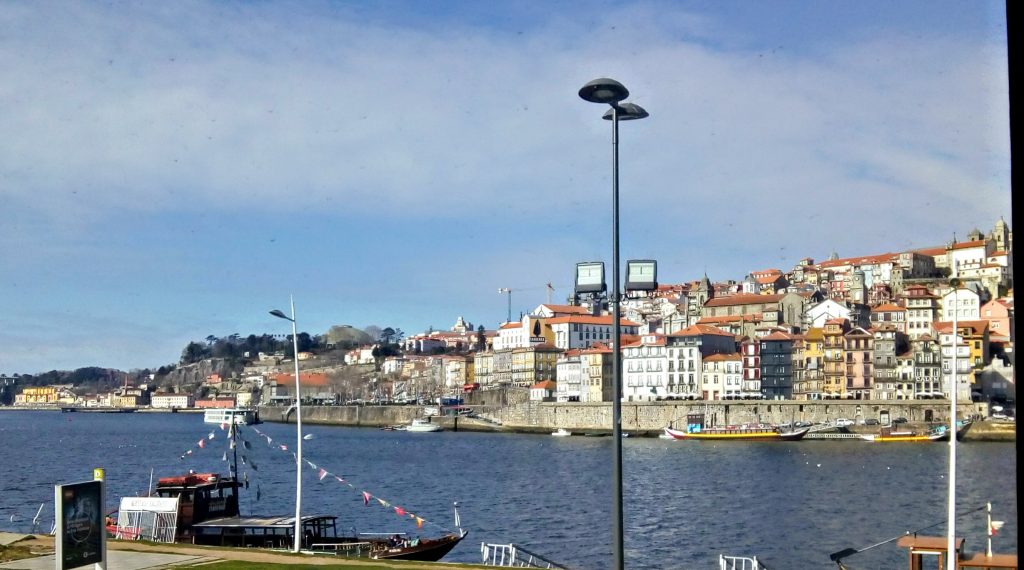 That evening we went to a Caffe Tapas.  It turned out to be a bit touristy and a weird waiter wanted to share our wine with us.  Adrienne had tripe again.  He enjoyed it but not as much as the tripe he had at Taberna St Antonio in Porto.  I had octopus in a green sauce which was OK but would probably have been better at a local restaurant.

On Friday we took the train to Granja – a little seaside town 10km south of the centre of Vila Nova de Gaia.

Wooden walkways connect the seaside villages (most with blue flag beaches) to each other. We walked from Granja to Miramar where there’s a little chapel set on a bed of rocks called “Chapel of the Lord of Stone”. 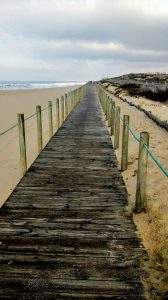 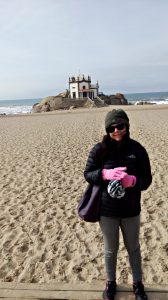 Adrienne refused to walk any further before he had a beer so we stopped at Necas Bar for a Super Bock. 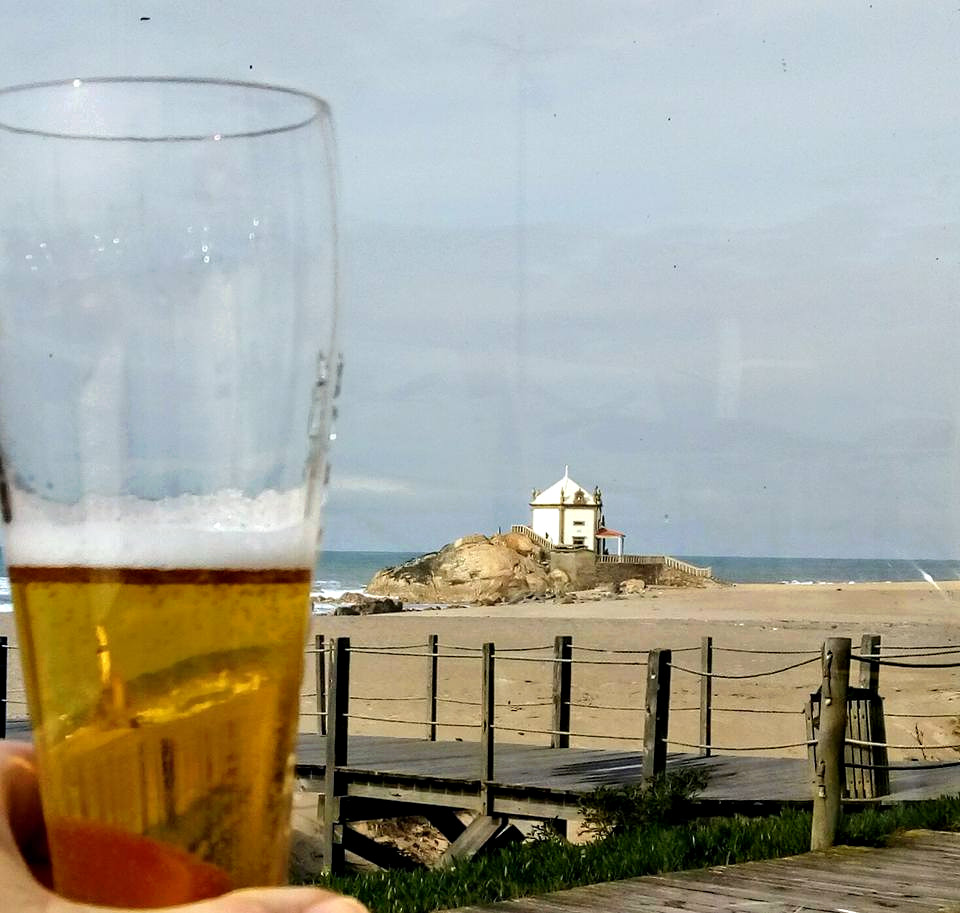 When we got to Valadares we decided to go for lunch at Restaurante Finu’s.  This was the only place in Portugal where I would say the service was absolutely terrible.  My main course never arrived – apparently they did not have whatever I ordered but didn’t tell me until Adrienne’s food arrived. Adrienne said he enjoyed his Chourizo Asada but the woman who I presume was the manager kept giving us the evil eye, so we could not wait to get out of there. 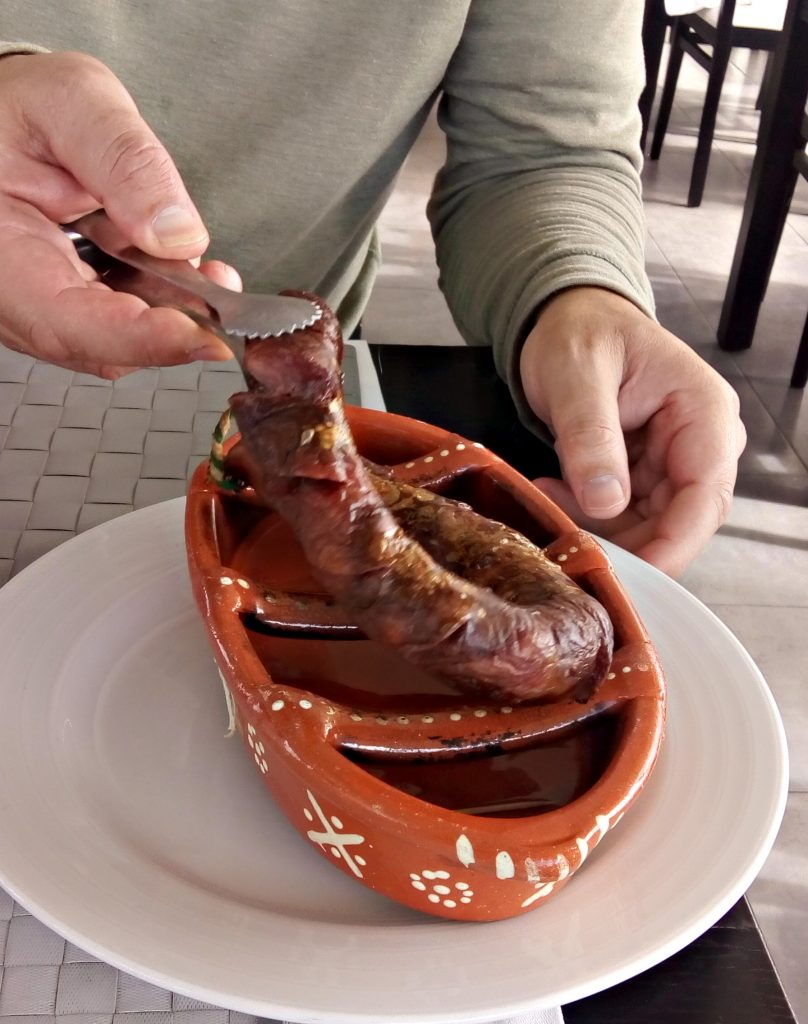 After a very long walk to Valadares train station we were ready to return to Gaia and have some wine. Sandra, the lovely lady working the front desk at our hotel recommended Arco Iris as a place where the locals eat and we weren’t disappointed.

I had delicious Alheira – a traditional Portugese sausage.  This was invented by the Jewish people who had to convert to Christianity in order to not be expelled out of Portugal in 1497 .  They could not eat pork sausages so they made sausages with bread, poultry, olive oil, garlic and chilli.   Adrienne had tripe again which he enjoyed.

He was very impressed with the complimentary after dinner grappa/port drink. The Saturday we took a day trip to Aveiro, 72km south of Gaia.

Aveiro is a city set along a lagoon with canals and colorful gondola like boats.  There was a  Saturday market when we arrived and everyone was out and about as it was a beautiful sunny morning. 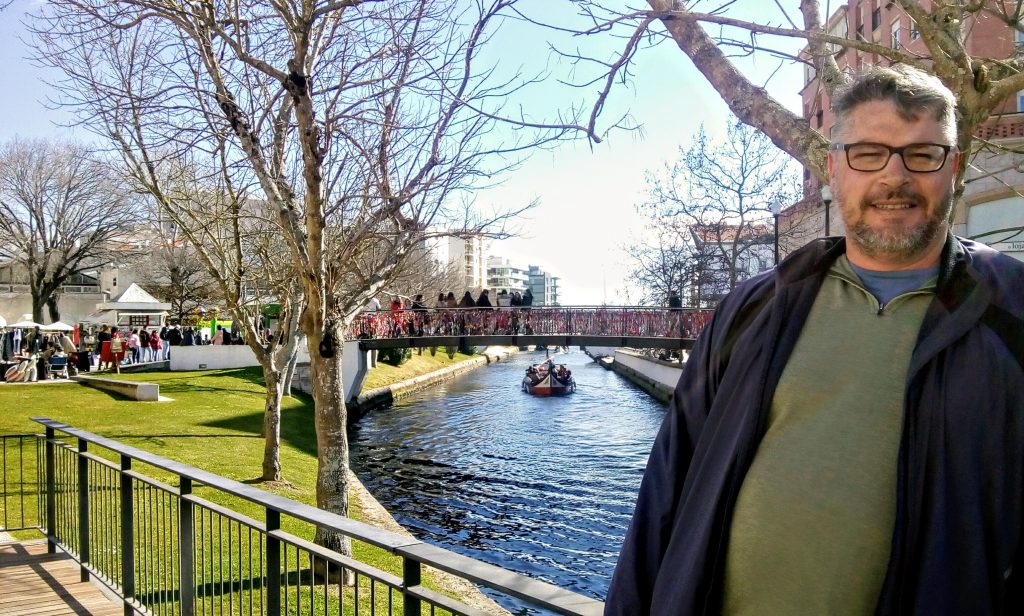 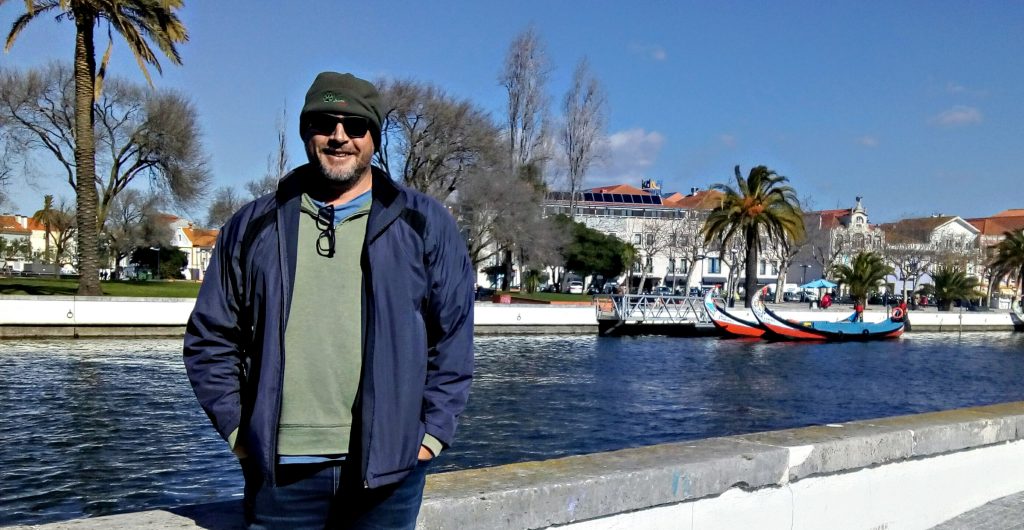 After exploring Aveiro we had a pre lunch beer and people-watched. 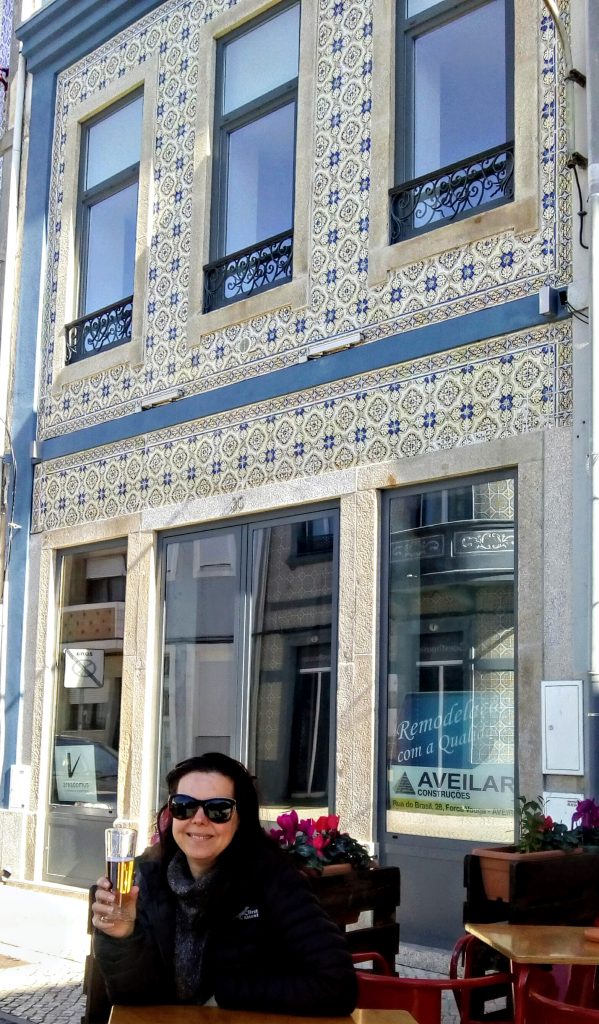 We had lunch at A Portuguesa.  I had the duck rice with chorizo which was delicious. Adrienne had the pork cheeks which he said was one of the best meals he has ever had. 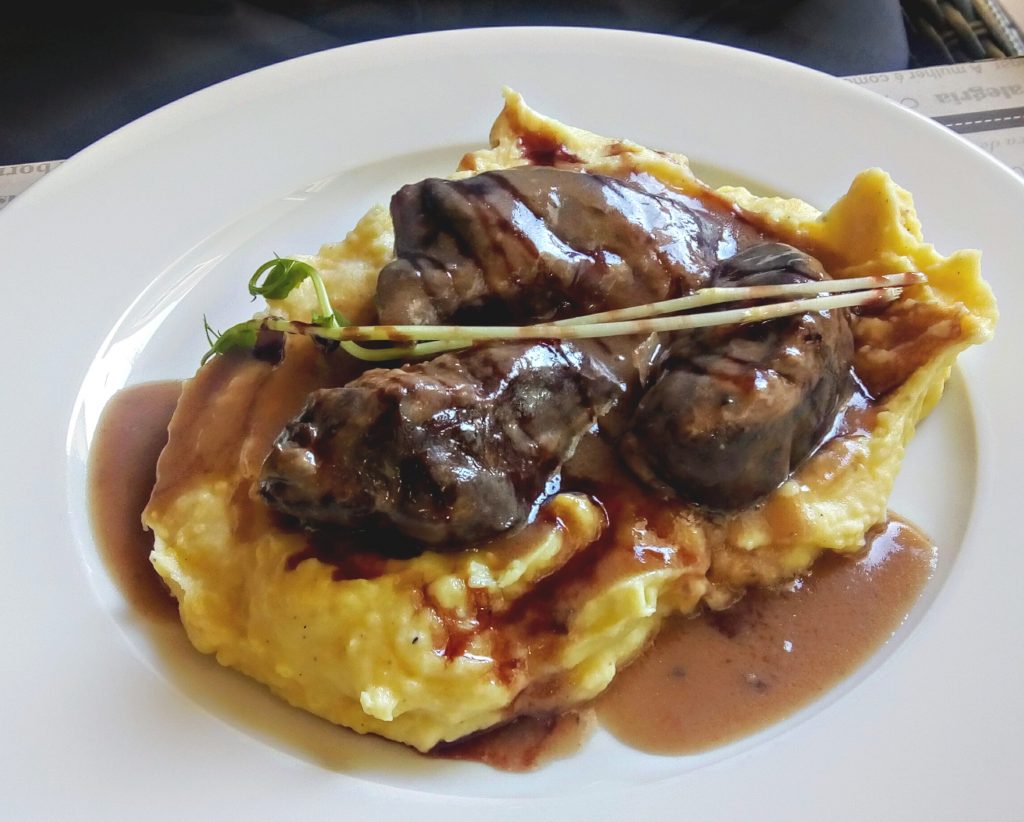 I cannot remember where or what we ate that evening.  I’m sure it was good though.

Sunday morning started out cold and wet.  As Murphy’s law would have it we were planning to walk to  Afurada – a traditional fishing village. There is a 6km pathway next to the Douro river from the centre of Gaia to Afurada.  We were in luck – the weather held and it was a lovely walk. The restaurants have grills outside where they cook fresh seafood. As it was Sunday we did not wait too long before settling in at Cafe Vapor where we had the most incredible octopus dish. 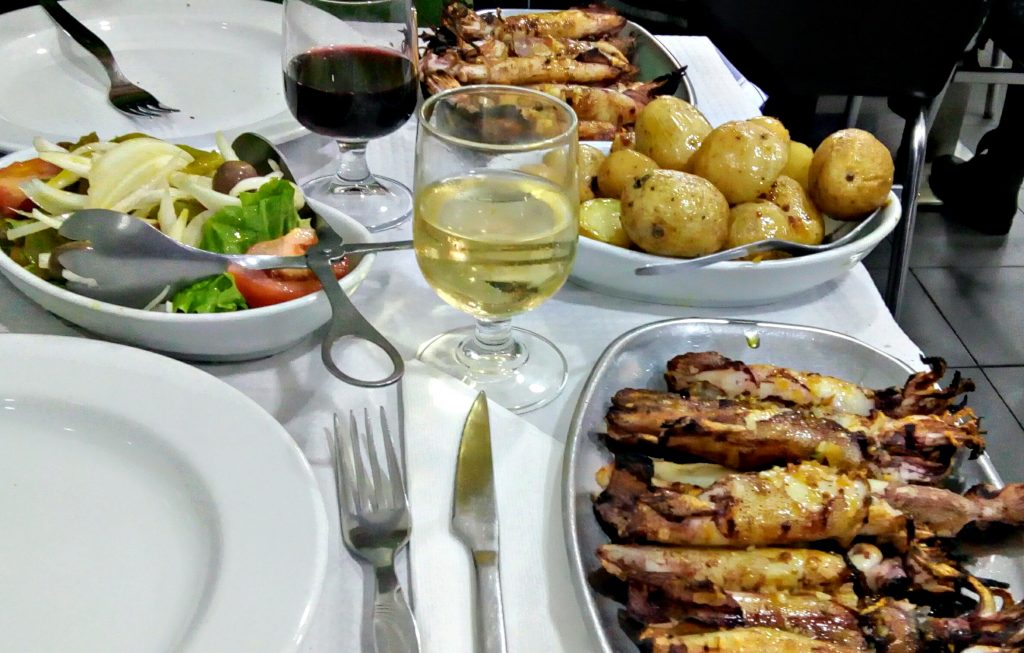 After eating way too much we knew there were no way we were walking back so we got an Uber.  Just as well as it started pouring with rain. We could not manage to eat anymore after that lunch. We spent the evening in our hotel room  drinking port and watching old James Bond movies.

On Monday we took the train  to Aguda – a beautiful small fishermans village about 10km south of the center of Gaia. We stopped for a beer at Cantinho da Aguda. 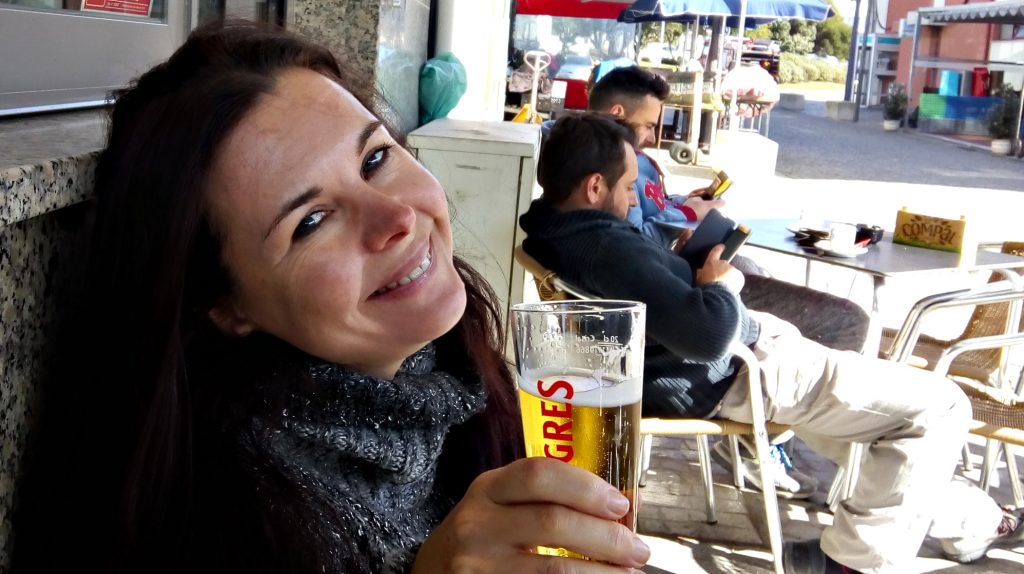 And decided to stay for some delicious fried chicken. 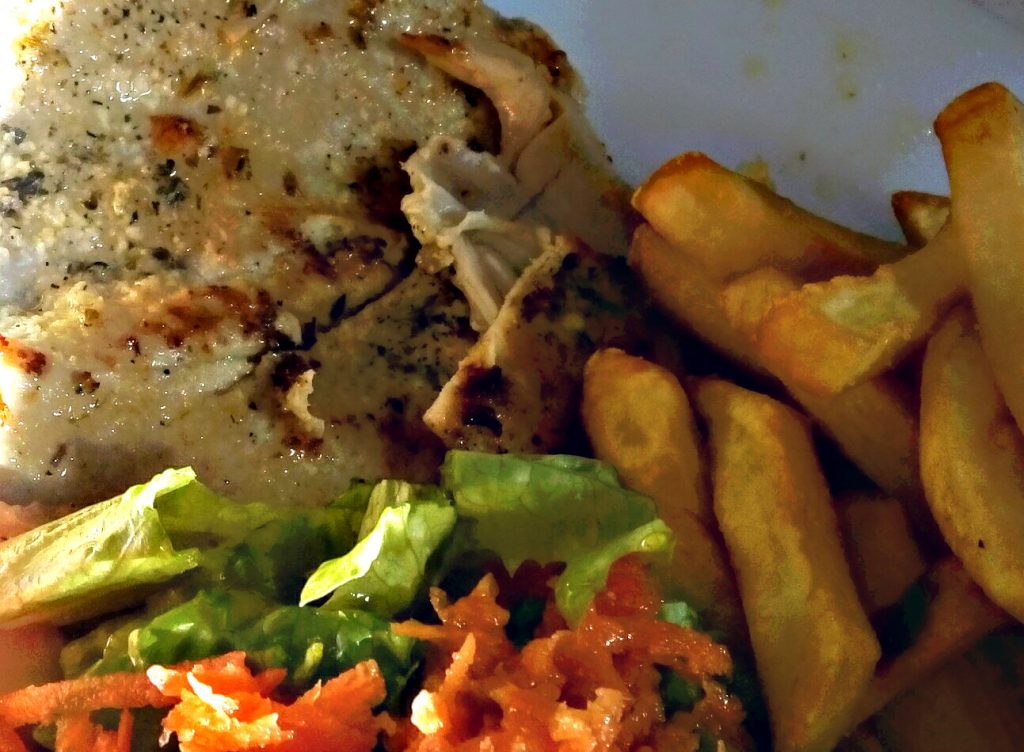 And some very purple wine. For dinner we went to Arco Iris again where we  had the Feijoada – a delicious tradional pork and  bean stew. Sadly Tuesday was our last day in Portugal.  We planned to do all our shopping but it was a public holiday and most shops were closed. So we drank beer. We absolutely loved Portugal and cannot wait to go back later this year to explore a bit more of this beautiful country.

Steak with a Braciole style filling and Gremolata